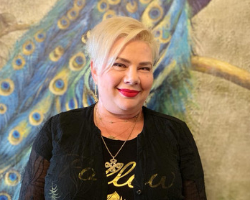 Juliana Hurgoiu, B.S.N., R.N. was born in Romania in 1966. She immigrated to the United States in 1988, in part to escape the harsh life under the communist regime in Romania. She obtained her Bachelor of Science in Nursing Art in 2002 at the Texas Woman’s University in Houston. During her studies there she received a scholarship from Shriners Hospital for Children indicative of her high standard of care and compassion towards children. During her 10 years career in the medical field, Juliana became a seasoned cardiovascular nurse with titles such as Clinical Preceptor, Professional Council representative, and Charge nurse in several departments.

1n 2007 she joined the Advanced Cardiovascular Care Center. Shortly after joining ACCC, the local medical community honored her with the title of one of the best international nurses in Houston. Her high standard of care was and is highly appreciated by her patients. One of them donated $5000 to her church and $25,000 to St. Luke’s Episcopal Hospital for her care and for the rest of her team’s care.